On the 2st of October 1944, Putten was hit by a German raid in which practically the entire male working population was deported to several concentration camps. In the night of 30 September, on the first of October 1944, a resistance group opened fire on a personal vehicle of the German Wehrmacht. The car transported two officers and two Corporals. A fire fight erupted. The two corporals got away. One of the officers fled (heavily wounded) to a nearby farm, subsequently he was brought to Harderwijk, where he died the next day. The other officer was captured and taken away by the resistance group.

As a gesture of good will, the resistance released him the next day. Unfortunately, this did not prefent the Germans from taking revenge on the local community of Putten. General Friedrich Christiansen ordered Putten to be surrounded by German troops, women and children to be led to the church and the men to be locked separately into a school and an egg farm facility.

After the women and children were released, all the imprisoned men between 15 and 50 were taken from the village and brought to the Amersfoort concentration camp.

Women and children were forced out of the village, then 100 residences were set on fire.

Over 200 victims died in the concentration camp Neuengamme, the rest of the victims died in neighbouring work camps like Wedel, Husum, Ladelund, Engerhafe, Meppen-Versen. Putten inhabitants also died in Dachau, Mauthausen, Ravensbrück, Bergen-Belsen or during transports.

The raid left deep wounds in the Putten society, wounds that have still not healed. Annually, a silent memorial, which is attended by a significant amount of people, is held at the monument De Vrouw van Putten. 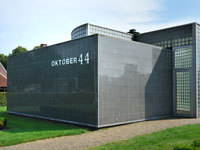 In this memorial room, the story about the raid is told in writing and imagery. Some memorial plaques were placed in this building. On these plaques the names of Putten’s 552 men which died as a consequence of the raid.

In the book store there are several books for sale concerning the war and the raid of Putten. The official memorial book can only be bought at the cashier at the Putten city hall. The costs of this book are € 12,50. For more information, please contact the cashier by phone: 0031 341 359 756.